It’s just arthritis, but what about Jared, 20, living with psoriatic arthritis? 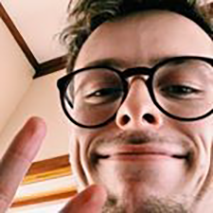 Twenty-year-old Jared McOnie of Wellington says he thought he reached a point of no return in April this year when the pain caused by psoriatic arthritis was relentless.

“I guess I started getting small symptoms in my mid-teens when I’d get occasional back and hip pains. Fortunately, the pains were never permanent, just occasional, but definitely reoccurring. One brief flare-up in my hips last year left me in immense pain for about a day, which was the first time anything seemed very serious”.

Jared thought he had something wrong with the muscles around his hips and sought help from a physiotherapist, which didn’t help much. Eventually, the flare ended and Jarod got struck by another flare-up in April this year.

“From then on, the pains have never stopped, it was like I’d reached the point of no return in the grand scheme of arthritis”. Several doctor visits and an x-ray later, Jared saw a rheumatologist who diagnosed him with psoriatic arthritis.

The diagnosis was not a huge surprise for Jared, because he and his brothers have psoriasis, it has been difficult for him. Jarod often feels stuck being less active and less mobile as he once was. It’s made his job as a manager difficult at times too, “it’s hard to focus on making quick decisions in hospitality on a Friday night when all you can feel is the soreness of your joints. It is really hard”.

Jared says he does have supportive people around him, at home and at the workplace and when he has a bad day, he reminds himself that it’s not the end of the world, and it’ll get better.

What is psoriatic arthritis?

Between 10% and 30% of those who have the skin disease will also develop psoriatic arthritis, which can range from mild to severe and affect one or more joints. Sometimes, joints problems appear before the skin condition, while other people with arthritic symptoms never develop psoriasis.

Men and women are equally affected by psoriatic arthritis, which usually appears during adulthood. The condition varies from person to person, and can easily be mistaken for other forms of arthritis.

The symptoms usually start slowly. Joint tissue becomes inflamed, leading to pain, swelling, and stiffness. Over time, the muscles and ligaments around the bone, the cartilage and the bones themselves become damaged, which can lead to joint deformities.

It’s just arthritis, but what about the cost?

Medical costs for arthritis amounted to $1 billion in 2018. Of that, a third were in-hospital expenses (public and private). A staggering 48% of people with arthritis are of working age, people with families and responsibilities, people trying to make a life for themselves.

The findings in the recent Economic Cost of Arthritis in New Zealand report have significant implications for how the health system manages arthritis. Some key findings related to health care costs:

Fill in the online form
Translate »