“Every arrow is a victory over the chronic pain and stiffness”.

The words of a young man reduced to pain and confusion. A man whose health took a turn for the worst when he was in the prime of his fitness life.

Justin Verrall was highly athletic at the age of 18 and loved to play the guitar. “I felt amazing. I felt superhuman in my physical abilities. I was in top shape that I thought nothing could stop me, so I trained to compete in a bodybuilding competition and to do my first half marathon.”

But he says he will not forget the day he first felt something was wrong.

“I was at school, and it felt like I was wading through water. Thick viscous water and every so often I would get a weird pain in my hip and lower back. It felt like something sharp was stuck. Whenever I tried to play the guitar, my hand that played on the neck would feel numb, and it felt like there were razor blades in my forearm.”

As time went on, pressing down on the strings of the guitar became difficult because it felt like pressing down on razor wire. Justin’s appetite started to fade to the point of losing almost 20kg in 2 months and struggling to get anything past the gag reflex. Justin’s health issues, school stress and a toxic personal relationship led to anxiety attacks.

After a year of pushing himself through music school and visiting countless doctors, Justin decided to take a year off in 2014 to look after himself and dedicate time to find out what was going on.

“We couldn’t afford private health care, so I took the year off to be available for public health appointments. I needed to find out what is wrong and how to get my old self back.”

By the end of 2014, Justin had a diagnosis: psoriatic arthritis. 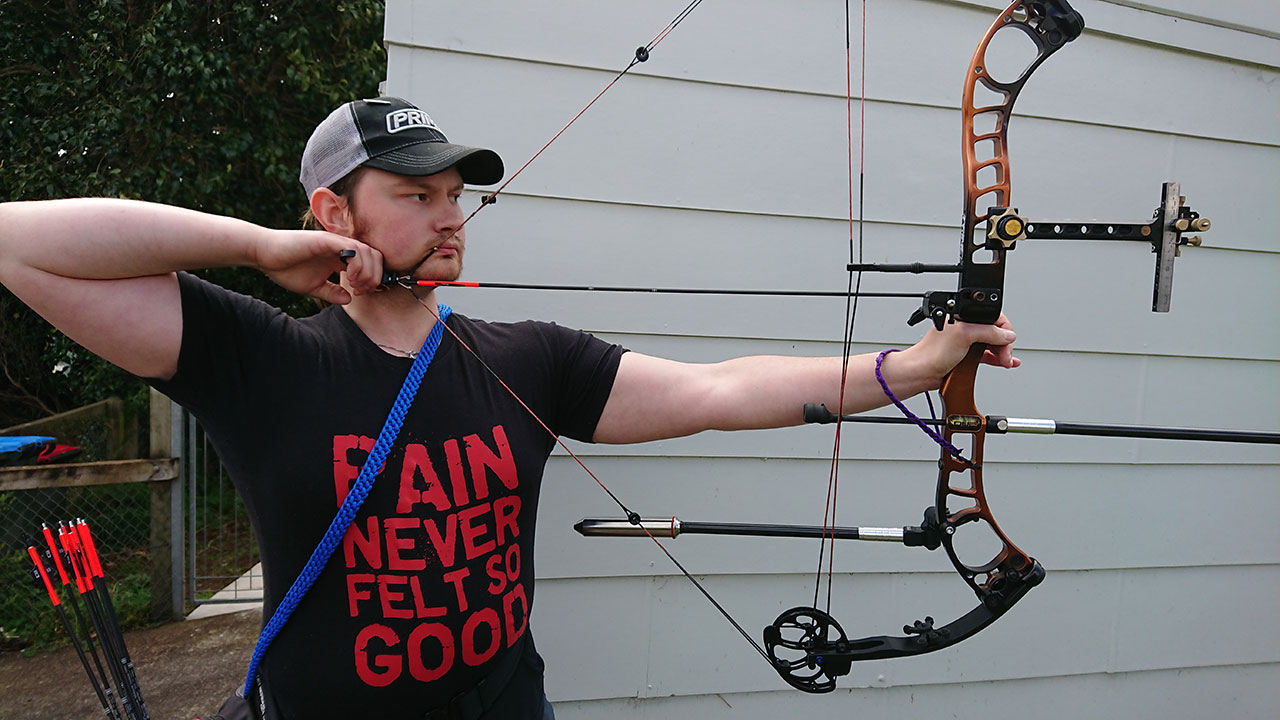 “For three years, I was put on and taken off all sorts of medication. My appetite improved, and I started itching to do more than just sit at home.”

“A friend gave me an old compound bow, which seemed like a suitable low impact activity and gave it a go. To my surprise and delight, it didn’t really aggravate my body to an unbearable degree, so I practiced at home with it.”

Justin found a wrist release aid to draw it back without using his hands to make shooting it less painful. He gathered tools to steady his aim when on target, shot a bunch of cheap arrows and broke a lot of them, all while suffering pain in the lower back and left hand.

“When I managed to get a robin hood (an arrow that goes through the back of another arrow), I decided to get good at this, so sought lessons from Kevin Watson from Advanced Archery.”

Justin ignored his pain during practice because he was worried that Kevin would stop giving lessons if he knew how bad the condition was. Once he completed the course, he paid off an entry-level modern bow, as the old one was not acceptable in a club sport environment.

Archery has given Justin a new lease on his new life with arthritis. “The arthritis is mostly under control; the pain is still there, but I fight to do archery. I get up in the morning in pain, but that’s ok. I have my archery now. Sometimes it hurts to take an arrow out of my quiver, but I fight it so that I get another day to enjoy doing something I’m passionate about.”

Justin enjoys the little victories. Arthritis has taught him to adapt and find other ways of living a full life. “I hate it for what it’s done to me, but it has also taught me so much too.”

Justin is working towards his second archery competition this year, the One Tree Hill Cup, but doesn’t think he will win. He says competing is a victory, as every arrow is a small victory over the pain he lives with.

“I want to show people that even someone who has lost a lot can still win one way or another.”

What is psoriatic arthritis?

Between 10% and 30% of those who have the skin disease will also develop psoriatic arthritis, which can range from mild to severe and affect one or more joints. Sometimes, joints problems appear before the skin condition, while other people with arthritic symptoms never develop psoriasis.

Men and women are equally affected by psoriatic arthritis, which usually appears during adulthood. The condition varies from person to person, and can easily be mistaken for other forms of arthritis.

The symptoms usually start slowly. Joint tissue becomes inflamed, leading to pain, swelling, and stiffness. Over time, the muscles and ligaments around the bone, the cartilage and the bones themselves become damaged, which can lead to joint deformities.

What is the cost of arthritis in New Zealand?

Medical costs for arthritis amounted to $1 billion in 2018. Of that, a third were in-hospital expenses (public and private). A staggering 48% of people with arthritis are of working age, people with families and responsibilities, people trying to make a life for themselves.

The findings in the recent Economic Cost of Arthritis in New Zealand report have significant implications for how the health system manages arthritis. Some key findings related to health care costs:

We are a charity that relies on community funding. Help us to keep finding and sharing stories from people with arthritis by making a donation today!