Keeping things real and the headspace right with sanity (gotta be sane, or at least enough saneness to keep these blogs up for a couple of years) at least a manageable level.

The sanity must be just real enough to want to keep the leaking eyes from workmates, wife, and w’others. This just rhymes with others with a W to match the sentence, and prove there’s some sanity alive and kicking; thank you to @INXS.

After the usual well over the 50 hour working week; the fun begins often on the several hour commute home, as per @Supertramp, taking the long way home, seeing new country on previously untravelled roads, and referenced for future image hunting locations.

Of course as there’s no other way to arrive at home after dark, then turn around blink, aaannd the alarm sounds anwhere from pre 0200-0500 depending on travel time to the primary weekend’s entertainment and artful challenge of a sunrise location of choice.

Yay, that’s fun, and add the standing about while waiting in the frosty icey southerly (it’s usually icy because what other type of wind is there in those dark pre-dawn hours?), while standing on either frosted ground, balancing on a muddy swampy lump while trying desperately not to unbalance and end up in it.

The changes (yes. . .  plural) of warm clothes in the car is testament that the unbalancing occurs, frequently.

Or, it’s on the riverbank next to the swamp, so it’s still freezing colde, even if it’s a westerly, they’re freezing colde too, though not quite as icey as the southerly sister in that same pre-dawn light while still waiting for the sun to rise.

Oh, remember the rain showers. . .  yes it does that too, while standing freezing in the swanni. The rain is cold and combine that with the freezing colde westerly and the icey sister southerly, it’s a wetness colder than those two winds put together. Of course it would be wouldn’t it; and that wetness permeates through every arthritic cell that exists in a human body.

In engineering we can harden steel by freezing to a coldness beyond the usual physical imagination.

It kinda does to the average (or not so average) poor photographer on the freezing iciness of a north island swampy riverbank needs to be hardened and tough to do this each week, yet contradictorarily it does; as while we’re freezing those arthritic bits off (ha, wouldn’t that be nice), the naturally-occurring physiological shivers to keep those arthritic cells from freezing keeps the wakeness happening until showtime. . .

A week (ok, perhaps just a half hour or so according to the real time) after arrival at the chosen location, in a lightening sky, the first hint of colour appears and at an ever increasing rate, suddenly the ice drops off, the shivering ceases and a couple of  fingers decide they’re just alive enough to operate some of the camera gear.

Like the rainbow, in a reverse of the sunset colours, the reds through the fruit bowl of  apricots/oranges to the yellows tones. The infinite shades of dark greys and black shadows turn into the fully saturated greens of leaves, the reds of algae and the oranges of young branchlets of willow and other riverside trees n shrubs.

The autumnal colours are so vivid this time of day, and, as the vapours of mists rise from rapidly warming vegetation swirling in the early morn thermals ever so slight. All this can occur in minutes, yes . . .just minutes, and in those minutes all senses come alive.

The scents of the warming water features, be it of swamp, riverside, coastal salted estuary, become so intense with the light.

The sound of the wildlife, game and wading birds as they forage and feast/ of the fins, the trout and tuna as they rise, often compete with the birds for the same bugs, now that’s a sight, and a fright for those not expecting.

The feelings of being one with the location of seeing every wee bug on the leaves and grass blades and within the heavily laden dewed webs.

This is the fun. This is what the beauty of Papatūānuku can show us, and make us live beyond what we can be, and for these morning moments that we are alive, whole and full of energy and move quickly up and downstream to capture more of this magic.

This is fun, this is worthy, and this resets the headspace. This is where we don’t even consider the pain that this will cost over the next week, as it is where we’ve risen so far above everything, this is the memories that shall become lifelong.

We shall remember the joy of just being there.

Have a look at the latest Arthritis Facts for NZ 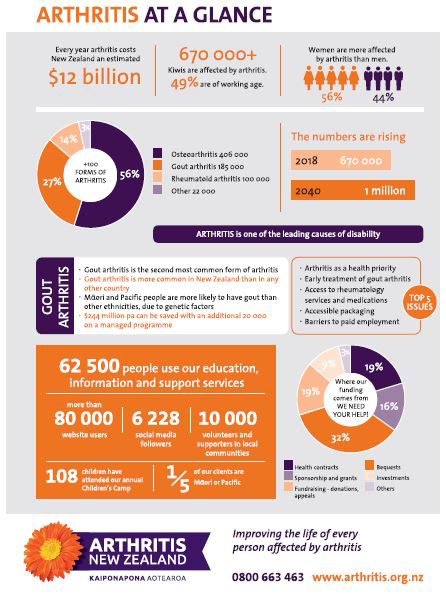 We have had a few people ask about hand pain on our online Facebook forums. Our fantastic Arthritis Educator Jane gave us this simple exercise you can do with household items most of us already have. Definitely worth a try! ...

We introduce you to Kylie, an Auckland woman living with arthritis. ...

Our arthritis educators are waiting for your call!

Call 0800 663 463 to get advice on nutrition, exercise and staying well during isolation.

We are here for you!

https://bit.ly/2vUpo4o
7 Tips for your mental health during the lockdown, for people with arthritis.
#COVID19lockdown #selfisolation #arthritis

https://bit.ly/2UlNXAG
The Driving Mis Daisy service is classed as an essential service!

https://bit.ly/2y9GIDc
Register using the code ARTHSOC in the field where it asks for a Super Gold Card number so that Countdown can work to filter you through the process as quickly as possible. If you have a Super Gold Card, enter the number too, after the code.

https://bit.ly/2QCO5cr
Information on the shift to online and telehealth!

Our arthritis educators are waiting for your call!

Isolation is difficult. Our arthritis educators a